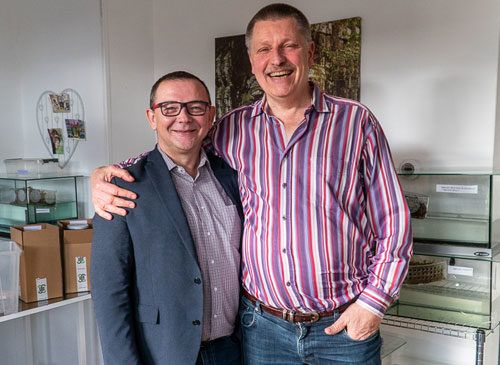 A reference work on the worldwide leeches is in the making

BIO-GEN Biofarm is proud of the cooperation with independent leech researcher Friedrich van der Wart (1959) from the Netherlands which we visited for an interview. As a writer of several books on invertebrates he told us that since 2015 he is writing a book on all the leech species in the World. He explained that leeches occur in freshwater, Seas/Oceans and on land. The reader will get the opportunity to learn about both predatory and medicinal leeches.

Since the early seventies I became interested and studied Hydrobiology with all his lifeforms; leeches were one of them.

In the eighties I worked for Biologist Dr. Wim Backhuys in Rotterdam and was assigned to translate prof. dr. Andrzej Wiktor standard work on Polish slugs “Die Nachtschnecken Polens”. Beside working in the Biology Publishing house I simultaneously worked in the Antiquarian Book Shop where in the Old and Rare department Systema Natureae from Carolus Linnaeus was present.

This book published in 1758 talked about the leech species described by then.

As a writer himself, Friedrich began in 2015 his writings on a book that discusses all leech species in the World: Classification And Checklist Of The Worldwide Hirudinea, Including Freshwater, Marine And Terrestrial Species within a historical perspective by Friedrich Wilhelm van der Wart

How many types of leeches do you have in your aquariums?

Now, I have 2 types of leeches: medicinal leeches and predatory leeches and 8 different species of leeches Among others there are Hirudo medicinalis, Hirudo orientalis and Hirudo verbana, which Bio-Gen have in their offer. I would like to have more species of leeches, but it’s not easy to find them, it’s just not common interest. You can’t go to the shop and buy any species you want. To expand my collection I need to get in contact with people all over the world, who are also interested in hirudotherapy and who want to exchange leeches from my “wish list” for species that I already keep. I’ve created a group on Facebook which helps me to get new contacts. I have to admit that I didn’t expect that such many people are interested in leeches.

How many members are in your group on Facebook and who are those people?

As we speak (2019) there are over 2300 members. This group is meant for hobbyists, hirudotherapists, hirudologists (professional leech researchers) and Ayurvedic physicians. This way a platform was created to exchange knowledge and experience in taking care of leeches in general. This is a great place to met other leech enthusiasts and thanks to a befriended Ayurvedic physician from India I was able to introduce a new medicinal leech in the hobby: the orange-belly Buffalo leech. Funny to tell is that a member from Australia called me “The Leechwhisperer” which I carry this title since then.

Is Buffalo leech the biggest one?

The Buffalo leech is the second largest leech in the World with his 38 cm. The largest one though is Haementeria ghilanii which can be found in Venezuela and reaches half a meter.

How big is the bite and is it painful?

Only when Buffalo leeches grow bigger you feel them actually saw through your skin but when they are still juveniles you hardly feel it. It is more the idea that people are scared of being bitten by any leech than that it really hurts.

Have you ever treat yourself with leeches?

Not exactly; I fed my leeches from my own blood and put once a little buffalo leech on my girlfriend’s ankle because her arthrosis causes her pain. She told me that the pain was away for one day but came back. I told her that to get a better result she needed more sessions.

Do you think hirudotherapy should be considered like a form of therapy in medicine?

By reading so many case reports and following the positive results of all the hirudotherapists present in my Group I am totally convinced of the benefits of hirudotherapy. I remember clearly the story of a woman who’s left ear was bitten off by a pittbull, the surgeon put it back on her but there was only a bloodflow from her heart to the attached ear but no bloodflow coming back into her system. That’s where the medicinal leech will come in. Next year I will also write an article on the healing substances (enzymes) in the medicinal leech saliva.

Do you think, people are open for hirudotherapy?

More and more people are becoming open for hirudotherapy thanks to the publications of positive articles in magazines, hirudo therapists’ interviews on Radio and Television. Fortunately, people that are interested in getting their licence to practice hirudotherapy is increasing.

Is that important to use leeches multiplied in laboratory way?

It is even essential that medicinal leeches are being cultured under laboratory conditions, that’s why I applaud the work of BIO-GEN Poland and I personally can and will recommend your firm since you are taking full responsibility in culturing medicinal leeches, ship them accurately and take care of a fast delivery.